Cedar Rapids Gazette staff writer Orlan Love’s article about the field day and other aspects of prairie strips appeared in the July 11, 2015 edition of the newspaper: 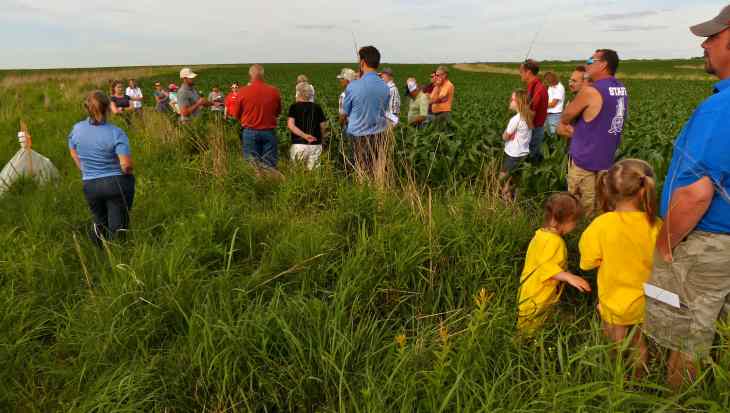 (2015)  Native prairie was once the dominant landscape in Iowa. An Iowa State University research team has discovered that strategically adding a little bit of prairie back onto the agricultural landscape can result in many benefits – in water and soil quality, habitat for wildlife and pollinators, as well as opportunities for biomass production.

Richard Sloan “reintroduced” Iowa prairie into contour strips in a crop field in 2011-12 and three dozen visitors got a close-up look at the continuing transition during an Iowa Learning Farms field day at his farm in late June.

The program featured comments by Sloan on his approach to healthy soil, which led him to incorporate prairie strips, and a walking tour of the strips with narrative comments by Amy Moorhouse, Iowa State University graduate student, and farmer liaison Tim Youngquist. Both are involved with STRIPS, Science-based Trials of Rowcrops Integrated with Prairie Strips.

The STRIPS project includes scientists, educators and ISU Extension specialists who work together on the use of prairie strips as an agricultural conservation practice. Their mission is to more fully understand prairie strips, to communicate their results to various audiences and to assist in the implementation of prairies strips on farm fields.

Sloan, chairman of the Lime Creek Watershed council, is a long-time conservation farmer, using no-till on his corn-soybean rotation as well as contours and cover crops. He explained that about five years ago, he started hearing discussion of the issue of native pollinator declines connected to conversion of perennial cropland to annual crops. At the time, he also heard that some researchers felt that reconverting 10 percent of Iowa’s land to prairie could reverse the declines of these native pollinators.

Prairie strips also fit into his farming style; he had about 4.5 acres in 30-foot wide contour buffer strips in the field, at the time a CRP size limit.

Things fell into place from there. Sloan learned of STRIPS and discovered Pheasants Forever had access to a source of 29 species of native seeds. In June 2012 he prepped the soil in his contour strips and was able to plant a prairie mix of 29 species using a county conservation board drill planter adapted to native seed. Since then, he’s been refining his approach to agricultural resiliency, making tweeks as he continues to learn.

In 2013-14 Amy Moorhouse, a master’s graduate student in ecology and evolutionary biology, started her thesis project that looks at incorporating diverse prairie vegetation into the contour strips.

“As part of the STRIPS project I am studying bee diversity and utilization of contour buffer and filter strips planted with various mixes throughout Iowa,” she explains. “By looking at strips that range from grass-only to high diversity mixes with numerous flowering species, we will be able to determine which vegetation mixes will provide ample habitat for bees.”

Amy has 10 sites in central and northeast Iowa that she’s studying, 9 private farms and one in Neal Smith National Wildlife Refuge near Des Moines.

“I found Dick Sloan through Practical Farmers of Iowa,” she explained. He replied to an email welcoming her research project to his farm.

Amy surveys each site May through August for bee species, plant species in bloom and ground beetle species. She uses nets to collect bees, bee bowls and vane traps, and soil emergence traps (for underground nesting bees), and a pitfall trap for beetles. This is second year of a 3-year investigation.

“Dick Sloan’s prairie strips are considered one of my higher diversity prairie strips in grasses with seven to 11 forb species, such as purple prairie clover and wild bergamot,” she said.

Tim Youngquist completed the tour with an overview of his role as STRIPS farmer liaison. While not involved in the prairie strips at Dick Sloan’s, Youngquist is the STRIPS contact person for answers about incorporating prairie strip on the farm. In addition to practical knowledge of farming — he grew up on his family’s century farm in Sac County — he also has practical experience at prairie restoration, holds two degrees in design and has done more than than 20 on-farm implementations of prairie strips.

More information about STRIPS, including contacts (including Tim), a webinar about STRIPS, resources and publication, is available at the website http://www.nrem.iastate.edu/research/STRIPs/.

AgriNews writer Jean Casper-Simmet rode along with some 75 people on the Cedar River Coalition’s tour of  conservation practices on several farms in the middle Cedar River watershed.

“The goal of the Middle Cedar Partnership Project is to establish connections with individual farmers to enhance adoption of practices that will improve soil health, improve bankside and downstream water quality, potentially limit peak downstream flows and enhance the long-term viability of producers…”, she wrote.

For the full story, read Jean’s article at http://www.agrinews.com/news/iowa_news/cedar-rapids-is-partnering-with-farmers-to-reduce-nitrate-levels/article_c5f44af6-fc70-5cb7-ba96-174e92f4911c.html

A July 29, 2014 webinar, created by Jamie Benning and Chad Ingels of Iowa State Outreach and Extension and Keegan Kult of the Iowa Soybean Association can be viewed at the webinar.

The webinar was created for the Miller Creek Water Quality Improvement Project on the west side of the Cedar River watershed and northwest of Lime Creek. The MCWQI Facebook page is at www.facebook.com/MillerCreekWQIProject.

Listen to the archived edition: Talk of Iowa

…and is featured in AgriNews

Educational and conservation efforts in Lime Creek watershed are featured in the March 8, 2014, issue of Iowa Farmer Today.  To read the article, visit http://www.iowafarmertoday.com/news/crop/nutrient-management-a-gradual-evolution/article_3041bf72-a487-11e3-9870-0019bb2963f4.html

More . . . on the grant and the project, including a July 23 front-page story by Orlan Love of the Cedar Rapids Gazette, on our “News” page.

Agricultural and urban flooding
on IPR’s Talk of Iowa

(April 2013) After two major flooding events for Iowa in 1993 and 2008, and a number of significant flooding events in-between, Iowans need to ask hard questions about how we have altered our environment.

Iowa Public Radio’s “Talk of Iowa” discussed agricultural and urban flooding,  looking at changes we’ve made to our landscape that has made it more prone to flooding.  The program also discussed both the damage flooding can cause, and some innovative ways farmers, homeowners and city planners can prevent flooding or at least minimize the damage it can cause.

For information on the Dick Sloan’s use of cover crops and the field day held in August 2012, visit the Lime Creek ‘News’ and ‘Special Projects’ pages.